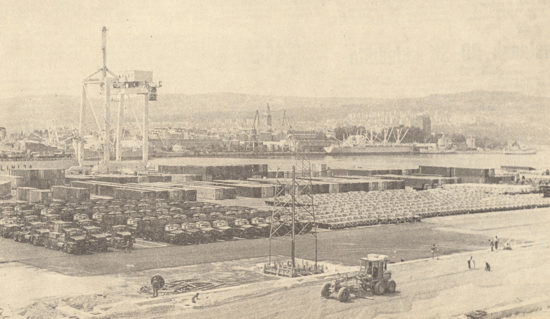 The Koper Container Terminal, initially with a 150-metre long, 33-metre wide quayside, capable of servicing vessels with drafts up to 9.5 metres, came into operation on 10th September 1979. The first container crane – which is still operational – was manufactured by the Maribor-based Metalna company. At the time, the terminal had a capacity of 50,000 TEUs per annum and an on-site storage capacity for 2,400 containers. It featured 200 reefer outlets for refrigerated units, and 10,000 m2 of covered area for container stuffing and stripping.
Today, Luka Koper’s Container Terminal quayside is 596 metres long, storage capacity amounts to 19,000 TEUs and features 340 reefer outlets. The total storage area at the Terminal covers 172,000 m2, and the estimated annual handling capacity exceeds 600,000 TEUs. The facility has four panamax and two post-panamax cranes, an additional two of which are to be installed in October of this year.
In 1980, 37,831 TEUs passed through the new Container Terminal, and accordingly accounted for 25 percent of the total 2,523,248-tonne cargo throughput at the Port of Koper. Container freight recorded a stable six percent per annum growth rate during the 1980s, and amounted to 94,767 TEUs in 1990. Unfortunately, the promises and expectations of further growth were curtailed a year later due to the war precipitated by the break-up of Yugoslavia; throughput was halved, and it took nearly ten years to re-attain the former levels. Steady growth continued again in the late 1990s with the introduction of new regular railway connections (block train services) with Austria and Hungary.
Throughput at the Container Terminal has recorded huge leaps since 2000, and between 2002 and 2005 average growth amounted to 19 percent per year. In 2005, the Terminal acquired a fourth bridge crane, manufactured by Konecranes, with a reach of 37 m.
In 2006, and due to the Terminal’s overloaded facilities, Luka Koper took the decision to extend Pier I. The additional 146 metres of quayside, deepened berth depth and new post-panamax cranes with a maximum reach of 51 metres, today allows the servicing of the very largest container vessels. By year’s end the lagoons behind quayside will be filled and regulated, with the reclaimed hinterland serving as extensive additional container storage area.
View all posts
Luka Koper d.d.