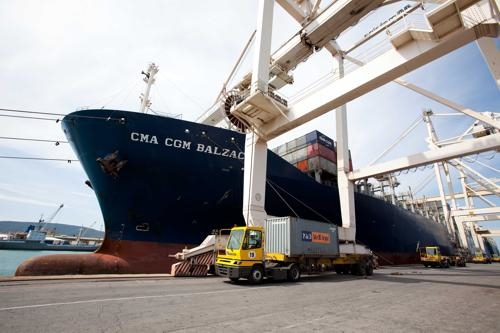 On 16th June, the CMA CGM Balzac containership – which unloaded 745 and load 672 containers – came alongside the extended first pier of the Port of Koper. The arrival of the Balzac via Trieste marks the commencement of the new Phoenician Express weekly container line linking the Northern Adriatic with the Far East. Jointly established by CMA CGM and Maersk Line, each with four vessels, this container service calls at Shanghai (China), Pusan (Korea), Hong Kong, Chiwan (China), Tanjung Pelepas (Malaysia / Singapore), Port Kelang (Malaysia), Jeddah (Saudi Arabia), Damietta (Egypt), Trieste (Italy) and Koper.
With a total carrying capacity of 77,941 tonnes DWT and volume for up to 6,747 TEUs, the Balzac is the largest containership ever to call at the Port of Koper. It has an overall length of exactly 300 m, a beam of 40.3 m and a 14 m draught fully loaded. Constructed in 2001 at Korea’s Hanjin shipyard, and registered under a Liberian flag, its maximum speed of 26.1 knots ranks it among the fastest vessels of its class.
This first arrival of the Balzac is an important event for Luka Koper. The extension of first pier has been one of the company’s most auspicious investments in recent years. It enables the Container Terminal to accept very large vessels, such as the Balzac. The first stage of the container quayside hinterland area was completed just a few days ago. By in-filling lagoons, Luka Koper has acquired an additional 9,000 m2of container storage area, while the quayside itself will soon feature four new post-panamax cranes, which are fully capable of reaching all the way across the deck of vessels such as the Balzac. All of this provides the Port of Koper with the possibility of becoming an even more significant European seaport, particularly as regards trade with the Far East.
Next week, most likely on Tuesday, Maersk Line’s first vessel on the Phoenician Express route – the Maersk Karachi, a container carrier about the same size as the Balzac – will arrive in Koper.

Luka Koper’s Container Terminal continues to operate well, in spite of recession. In the first five months of this year, throughput amounted to a total of 141,416 TEUs, namely, down by a mere percentage on the same period last year, and six percent ahead of expectations.