European Commissioner for the Environment in Luka Koper 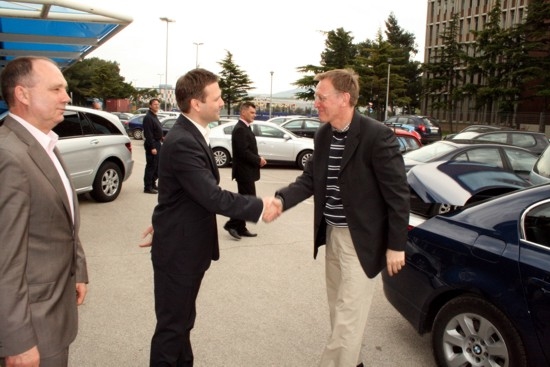 Ecology as a Competitive Edge

Last Friday, Luka Koper was visited by the European Commissioner for the Environment Janez Potočnik, who also took a tour of the port and remarked that definitely needs both Luka Koper as well as clean environment. The Commissioner was pleasantly surprised by his tour, in particular due to the port’s its green appearance as well as the regulation of the entire facility. In addition, he emphasised the extraordinary significance of the EMAS environmental standard, which Luka Koper is currently in the process of acquiring. EMAS certification will provide formal attestation of the environment-related activities that the company is already undertaking, and at the same time it binds the port to its avowed environmental responsibility.

Mr Potočnik was also pleased with the National Spatial Plan for further development of Slovenia’s sole seaport, whereby he expressed his wish that the plan will be accomplished in full, and not only in that part dictated by economic interest.

In his discussions with Commissioner Potočnik, Gregor Veselko, President of the Luka Koper Management Board, introduced the work of the Northern Adriatic Ports Association (NAPA), which might also play a significant role from the perspective of reduced environmental pollution in Europe . Indeed, the North-Adriatic route provides shorter transport routes for cargo flows between Europe and its major trading partners in Asia . The Commissioner agreed that such associations are the right answer to the challenges of European transport policy.

Further to this, Mr Veselko pointed out that Luka Koper is fully aware of the importance of harmony between the port and the broader environment. The company’s green policy is also internationally marketed as a brand; Luka Koper operates in markets such as which are already considerably committed to environmental protection, and they are oriented to the notion of sustainable development in all areas, and expect likewise from their partners.

Luka Koper is the first Slovenian enterprise that Commissioner Potočnik has visited since entering office at the European Commission. Prior to the port he, however, visited the Škocjanski Zatok Nature Reserve, the largest brackish wetland in the country, which is situated on the port’s doorstep. This important series of ecosystems, habitat to a number of endangered species, has enjoyed Luka Koper ’s support since it creation.