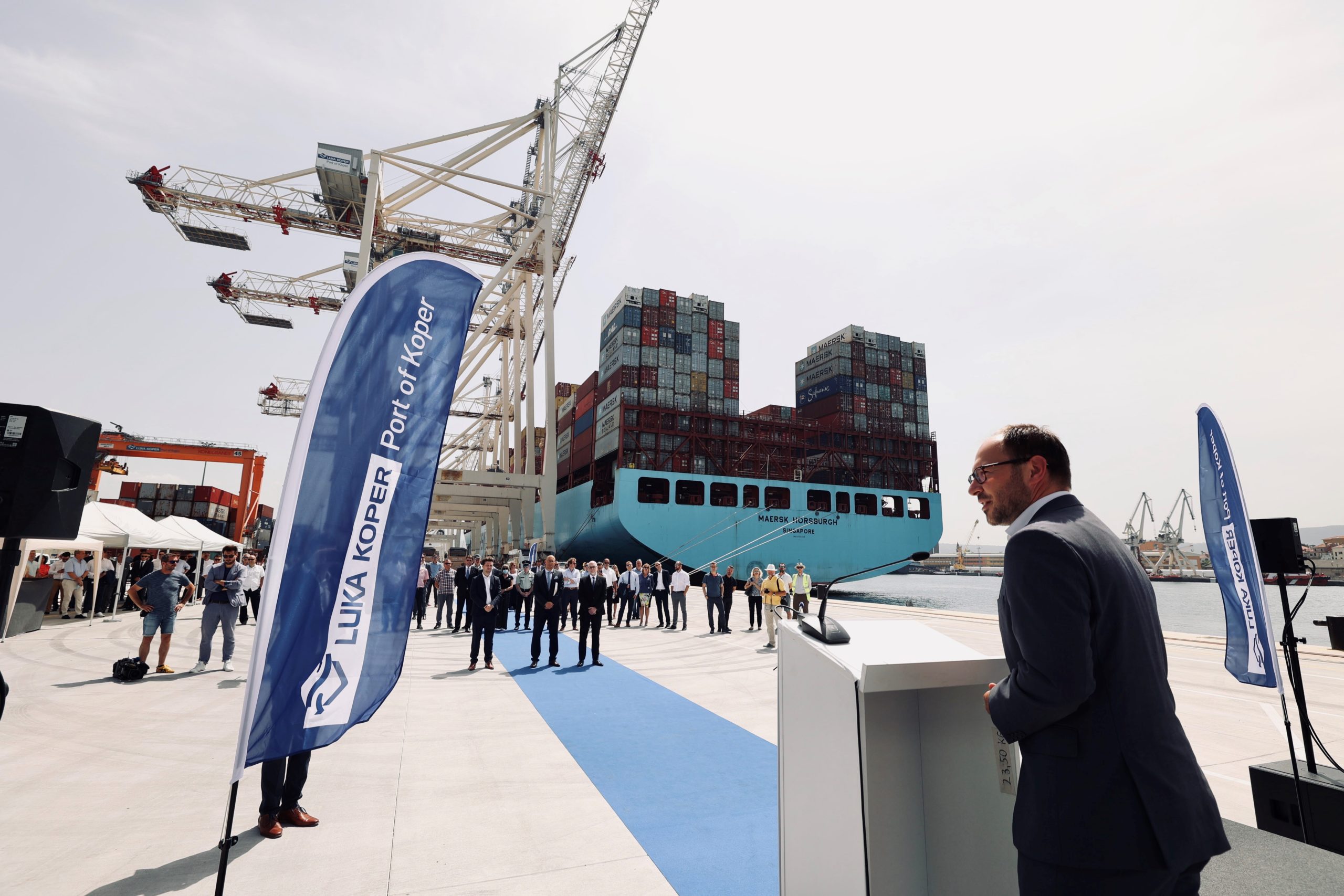 The container quayside at the southern end of Pier I in the Port of Koper has been extended by 100 metres. Today, in the presence of Minister of Infrastructure Jernej Vrtovec, the new quayside was ceremonially handed over.

The extended quayside with a new berth, which we have named Link 7D, is just one part of a large investment as we continue to build a container storage area of almost 25,000 m2 in the quayside’s hinterland. Construction is taking place offshore, so the entire structure is supported by steel piles. There will be 770 piles in total, with an average length of 65 metres. The new storage areas are expected to be ready in the first quarter of next year. The annual capacity of the container terminal will then be one and a half million TEUs. The total investment is worth €45.6 million; part of the funding was obtained from the European NAPA4CORE project. “The containerisation of goods in world trade has reached unprecedented proportions. Shipowners are building bigger and bigger ships and ports need to adapt to this. Otherwise, we would be out of all major commodity flows. That is why the new acquisition, the new Link 7D, is only the beginning,” said the CEO of the Port of Koper, Dimitrij Zadel, emphasising the importance of the investment.

Given that half of all containers handled in Koper today (almost one million TEUs in 2020) already travel by rail, the future development of the Port of Koper depends to a large extent on the timely construction of an additional rail link to the hinterland. The so-called second track will be operational in 2026, but the country is also modernising other parts of the Slovenian rail network. The Slovenian Minister of Infrastructure, Jernej Vrtovec emphasized that the ministry would do everything in its power to support the development projects of the Port of Koper, as this would also speed up the development of Slovenian logistics.

In the Port of Koper, we have also ordered two new Super-post-Panamax container cranes (there are already two), which will arrive at the end of next year. In addition, after 2022, we will start building the northern part of Pier I, which will also be dedicated to containers. “If we take into account that the construction of the second track is worth one billion euros, it is easier to understand the bold and ambitious strategy of Luka Koper to invest half a billion euros by 2025 to take advantage of the increased railway capacities,” said Uroš Ilić, Chairman of the Supervisory Board of the company, summarising the strategic business plan.

Container-handling activity at Pier I started in 1979, when the first 150 m of quay were built. Since then, including the latest extension, the operational quay has been lengthened four times. Today, the container quay is almost 700 m long and we have nine container cranes in operation. Next year, there will be 11. In four decades, we have handled almost 12 million containers (TEUs) at Pier I, two thirds of them in the last 10 years. In terms of containers handled, the Port of Koper operates the largest container terminal in the Adriatic.