New Representative Office in India to Strengthen Position on the Subcontinent 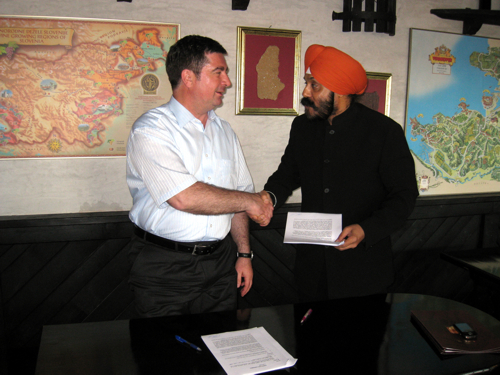 At the beginning of June, Luka Koper will acquire a new representative office in India. The P.S. Bedi Group, with its headquarters in New Delhi, has been entrusted to represent Luka Koper in this increasingly important market. H.S. Bedi, the Group’s president, who attended the logistics conference in Portorož, signed a co-operation agreement with the Luka Koper Management Board. The P.S. Bedi Group, which offers integrated logistics solutions for sea, land and air cargo, as well as transport and warehousing, is a global logistics services provider with a worldwide presence and an extensive branch network in India.

Given its strategic location and rapidly developing economy, India is becoming a world economic superpower. In 2008, some 80,000 tonnes of Indian cargo – in particular containers, vehicles and a variety of bulk cargos – passed through the Port of Koper. Although India’s cargo throughputs have recorded an increase over recent years, the amounts are still relatively modest. European trade with India is dominated by the ports on the northwestern side of our continent, and by making the right moves Luka Koper intends to take advantage of its geographical location and become an attractive alternative.