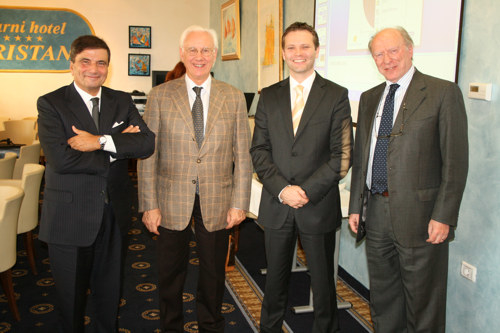 On 11th November 2009, the managing directors of four Northern Adriatic ports – Koper, Trieste, Venice and Ravenna – signed an agreement on the establishment of NAPA – North Adriatic Port Association. With a registered office in Trieste, and following the model of the European Union, the presidency of this new legal entity shall rotate every six months between its member ports. Gregor Veselko, President of Luka Koper Management Board, was elected first President of the Association, whilst Giuseppe Parrello – President of the Port of Ravenna Authority – shall serve as his deputy.
The four entities combined their strengths in order to promote the Northern Adriatic route and present themselves as an alternative to the ports on the north-western side of the continent. In addition, the Agreement anticipates co-operation in the development of maritime and hinterland connections, visits by cruise lines, environmental protection, safety and information technology. The ports will also invest effort into the co-ordinated planning of road, rail and maritime infrastructure, as well as harmonisation of regulations and procedures in the field of port service provision. Together, these four ports will form a European logistics platform, in particular with regard to servicing the markets of the Far East as well as Central and Eastern Europe. The first joint project will be implemented next year, when the Association will introduce its activities at the Transport & Logistics China 2010 fair in Shanghai. The grouping shall also be open to new members, in particular – as well as in light of Croatia’s impending accession to the European Union – the Port of Rijeka.
View all posts
Luka Koper d.d.