Signing of Long-term Agreement on Alcohols 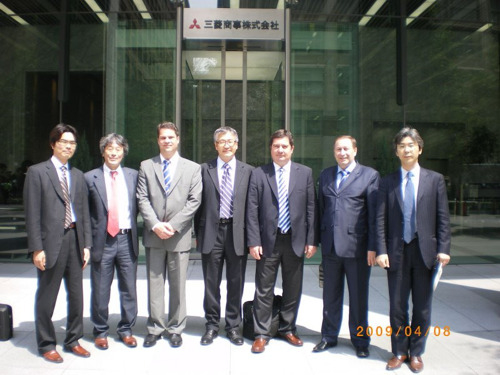 A few days ago in Tokyo, the Luka Koper Management Board signed an agreement with Japan’s Mitsubishi corporation on the long-term rental of alcohol storage tanks which are to be used for methanol and ethanol. Construction of this terminal facility, to be constructed on the northern side of Pier I, is anticipated to commence in May. The investment, which is estimated to be in the region of € 15 million and includes a new quayside, six tanks with a capacity of 31,360 m3 together with pertaining handling equipment, shall be completed by the end of the first quarter of 2010.
The terminal will function as a Central European distribution centre for industrial alcohols, and by way of this new venture, the company is embarking upon a long-term business relationship with an important global corporation; indeed, this agreement not only points towards Luka Koper being a reliable partner, but may well result in further deals in the future. Avgas handling and storage facilities were similarly introduced about a year ago, further to which Luka Koper’s new joint-venture subsidiary – Adria Transport – today operates a kerosene distribution service between Koper and Vienna three times a week.
View all posts
Luka Koper d.d.