On April 11, 2019, the trade fair Seatrade Cruise Global – the world's largest and most popular business-to-business event in the cruise tourism industry – closed its doors in Miami, USA. At this year's edition, Slovenia and Koper were again presented as one of the more promising European destinations, under the auspices of the Slovenian Tourist Board (STO), the Port of Koper and the Municipality of Koper. 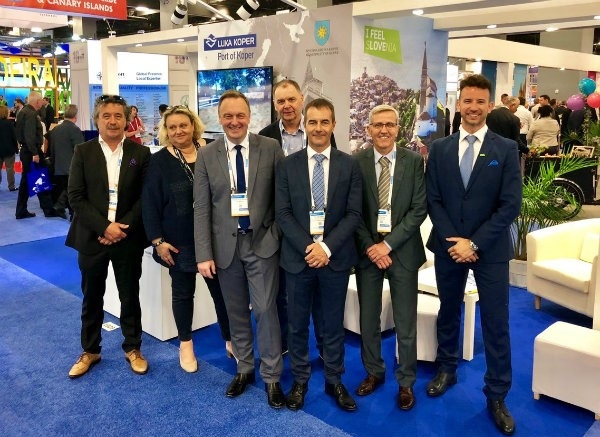 The Seatrade Cruise Global event is traditionally attended by key cruise-industry stakeholders: shipowners, shipyards, ports, tour operators, and representatives of local and national tourist boards. Slovenian representatives have attended the fair for 14 years now. Among the attendees were representatives of the Slovenian Tourist Board (STO), the Municipality of Koper, the Port of Koper, the tour operators Atlas Express and Istranka, Nomago, the Portorož Tourist Board, and the shipping company Centralog.

“Slovenia presented itself at the Seatrade Cruise Global fair as a unique boutique destination which is able to satisfy the expectations of even the most demanding guests. Due to its diverse and high-quality offer, as well the destination’s commitment to sustainability, our country is becoming an increasingly recognizable and desirable destination also in the segment of luxury nautical tourism. Therefore, Slovenia has many new opportunities in the field of cruise tourism. Of course, we should not forget that the Mediterranean is the second largest destination in the world, with a 17% market share of cruise traffic,” explained Aljoša Ota, director of the STO’s representative office in Italy.

“Shipowners’ reservations for this year’s season and the next three seasons are promising. This year, cruise liners will moor in Koper three times a week on average, basically every weekend. New shipowners with high-end liners have also announced arrivals, which means that we have a really good product,” commented Bojan Babič, head of the passenger terminal in the Port of Koper, who also attended the fair.

“The mooring of liners off of Piran is becoming increasingly attractive and interesting for shipowners. We are striving to further improve the product and make it of the highest quality, in order to attract top-level shipowners. Piran is the pearl of the Northern Adriatic, and we must present it in a proper manner,” commented Igor Novel, director of the Portorož Tourist Board.

Slovenia is an increasingly recognizable and attractive destination for the cruise industry, mainly due to its diverse and high-quality offer that inspires guests with authentic experiences, a personal approach, and cultural heritage and tradition. On their visit to Slovenia, cruise passengers are impressed by the authentic experiences, especially the area’s gastronomy, which is distinguished by local ingredients, top quality wines, and genuine culinary experiences. When comparing Koper and Slovenia with other ports in the Northern Adriatic, shipowners recognise many advantages, first and foremost quality services that are on the same level or even exceed those of many European destinations. Among the other advantages are the tidiness and cleanliness of the surroundings and the proximity of the historic centre of Koper, which is in the immediate vicinity of the passenger terminal.

Cruise tourism has generally recorded positive results. The growth trend in the number of passengers, both in the global and European markets, is expected to continue in the coming years. In 2018, as many as 28 million passengers worldwide travelled aboard liners, seven million of which were Europeans. With 17% of global passenger traffic, the Mediterranean is still the second largest global destination, immediately after the Caribbean, which ranks first with 35%.