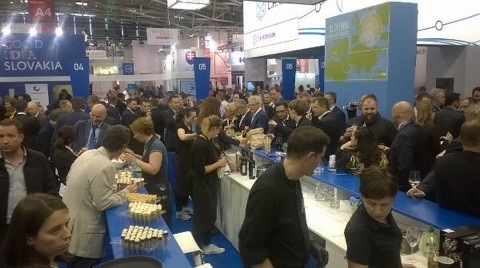 On May, 9, 2015, opened its doors the world’s leading trade fair for logistics – Transport & Logistic, which takes place every two years in Münich. The event, which has a 30-year tradition, this year attracted more than 2,000 exhibitors from 60 countries.

The Port of Koper attended the fair within the delegation of 15 Slovenian logistics companies (under the auspices of the Spirit agency and CCSI – Chamber of Commerce and Industry of Slovenia) and today organized a special event for business partners in the context of the celebration of its 60th anniversary. »Despite its diamond jubilee, the Port of Koper is among the younger ports in the industry. However, we have proven that with persistence and a clear development vision we cannot just compete with more visible competitors, but also surpass them on specific segments«, pointed out the President of the Management Board of Luka Koper, Mr. Dragomir Matić.

At the fair we presented the new investments in port facilities and the latest key achievements. The decision to focus our development mainly on the container and vehicle throughput while simultaneously preserving our multipurpose status proved to be the right one. For seven years we have been the leading port in the region in container throughput – last year nearly 845 thousand TEU – and among the leading in the Mediterranean in the throughput of vehicles – with 749 thousand vehicles we were placed second among the Mediterranean ports last year. Last year’s total throughput in the amount of 22 million tonnes broke the record and the current trends anticipate even higher figures at the end of the year. The already implemented and planned investments will play a major role in this, especially the investments made in the container terminal: in particular the new super post panamax cranes with a width of 24 containers and the transition to RMG technology which allows the simultaneous loading of five train compositions. However, the key investment in the container terminal’s future will be the extension of the quay.

As emphasized Matić, further development of the port is not possible without the excellent support of the entire port community, state bodies and the Slovenian logistics sector in general. “For this reason I am particularly pleased that at this year’s fair we participate together with other Slovenian logistics operators in order to prove that Slovenia is, despite its small size, one of the key European logistics hubs.”