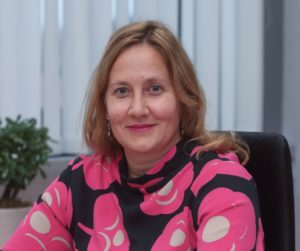 Irma Gubanec completed her master’s studies in business policy and organisation at the Faculty of Economics of the University of Ljubljana. She began her career as independent finance consultant at the Development Fund of the Republic of Slovenia, where she was subsequently promoted to director of the Finance Department. Between 1999 and 2000, she worked at the Ministry of Economic Affairs as state secretary responsible for assets and finance. She subsequently sought new career challenges in the company P&S Svetovanje in analize as independent finance consultant in charge of company valuations and company mergers and acquisitions. Between 2001 and 2010, she held the position of deputy director general responsible for business economics at the national public broadcasting company RTV Slovenia, where she was responsible for finance, accounting, controlling and RTV subscription calculation. In 2010, she joined the media company Delo d.o.o., where she occupied several key positions. Between 2013 and 2017, she held the position of president of the management board and director general responsible for meeting the company’s strategic targets, including the company’s financial, personnel and business restructuring. Following the resolution of the company’s supervisory board, on 29 December 2017 she commenced her five-year term of office as a member of the management board of Luka Koper, d.d.