Business performance in 2008 – Growth in throughput and revenues 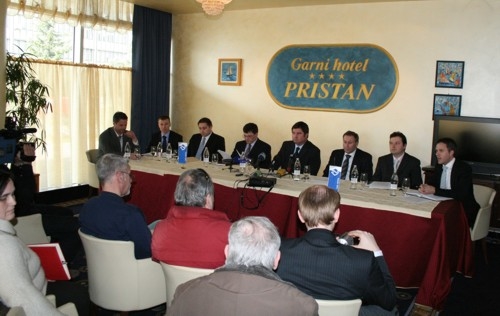 Koper, 27th March 2009: “Luka Koper d.d.’s operations in 2008 were a great success. Despite the commotion on international financial markets and the effects of economic crisis, our performance has been most satisfactory,” commented Mr Robert Časar, President of the Management Board of Luka Koper d.d.. on Friday’s press release. Cargo throughput rose by 4 percent to 16 million tonnes, and exceeded the record volume. Accordingly, operating revenues were up by 10 percent to € 122.7 million. Despite the increase in expenses, the company managed to maintain its profits from ordinary activities at 2007 levels, i.e. € 20.4 million. This is extremely significant due to the fact that operating profit is a major element in financing the infrastructure investments that will underwrite the expansion of port capacities, and successful operational growth into the future.
The 13% rise in expenses can be attributed to a variety of factors. It is partly a consequence of spatial distress within the port area: as a consequence of intensified handling operations, free space has become severely limited. The signing of the new Collective Agreement and the subsequent rise in employee wages, as well as the introduction of the Concession Agreement and a Concession Fee which is three-times greater than the erstwhile rental agreement, also exerted a significant upward influence on costs. “In exchange, we have reconciled labour relations and assured undisturbed operation of the Port of Koper for 35 years. To me personally, this is a huge accomplishment. Luka Koper’s status of a stable and reliable partner has been augmented and vindicated,” added Mr Časar.
The only dent to the excellent commercial performance was the fall in net profit, which amounted to cca. € 14 million, a downturn of 45% on 2007. This decline is exclusively attributable to the crash of capital markets, during which period any disposal of financial investments wasn’t a rational choice; capital gains have been lacking as a result, and it has become increasingly necessary to resort to borrowing in order to finance fixed asset acquisitions. The impairment of capital investments has absolutely no effect on the company’s performance, or indeed its liquidity; it is a strictly accounting category in the company’s Balance Sheet, disclosed under equity.
Last year, Luka Koper allocated € 171 million for infrastructure projects, eighty percent of which was exclusively intended for investment in port operations. By way of this, the company’s Balance Sheet total increased by 23 percent, and the commensurate enhancement of competitiveness is already beginning to be reflected in cargo throughput. “I’m delighted that we managed to implement some very important investments last year. The extension to Pier I was completed, as were the first phases of projects for the construction of new vehicle warehouses and oil derivative storage tanks; state-of-the-art facilities were also provided for the Fruit Terminal, and new plant and equipment was also acquired”, affirmed the Management Board President.
2009 will see the completion of projects already underway, but there is insufficient cash flow within the business to achieve this; accordingly we believe the state shall overcome any financing gap. Luka Koper’s commercial performance affects the entire economy of Slovenia, and each euro the company generates engenders 13 euros of income nationally. “It’s difficult to predict performance over the coming year. Every day we hear about companies closing their plants and laying off their employees. Fortunately, nothing like this is happening at Luka Koper. Performance in January was above expectations, and data for February is also promising. Nevertheless, if conditions were to radically worsen, I firmly believe that the state would give us a hand. As the majority shareholder, it could waive dividends, and ultimately even a portion of concession fee; it could also help us in drawing money from European funds or provide stable long-term financing. In view of this, a capital injection by the state seems to be a reasonable solution, as well as proof that it supports the company and believes in its development strategy”, concluded the Management Board President.
View all posts
Luka Koper d.d.