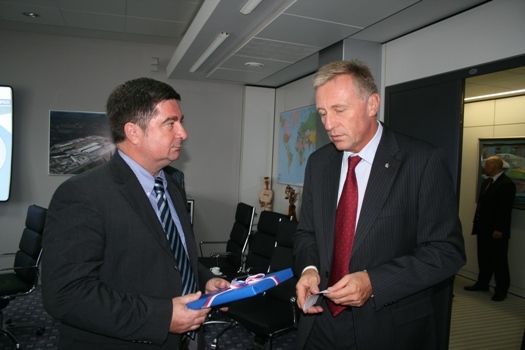 Within the Strategic Forum at Bled, Czech Prime Minister Mr Mirek Topolánek, visited the Port of Koper on 31st August. He was received by Mr Robert Časar, President of Luka Koper‘s Management Board, and his deputy Mr Aldo Babič. The Czech Republic is a significant market for Luka Koper, and is estimated to afford great development potential.
Last year, Luka Koper handled some 200,000 tonnes of goods on behalf of its Czech partners. The major portion of this is attributed to steel manufactures for the country’s automotive sector, in addition to which, exports of Škoda cars, destined for Mediterranean and North African markets, also pass through the Port of Koper. Special mention should also be made of the new Hyundai plant in Novošice (in northern Moravia), which shall further foster the development of vehicle-related cargos. This trade also pertains to container freight throughput, due to the fact that assembly components are transported in containers via Koper.
Prime Minister Topolánek expressed great interest in Luka Koper‘s infrastructure projects, such as the construction of Pier III and the extension of the other two piers, as well as the construction of new garage parking facilities. A large proportion of landlocked Czech Republic’s intercontinental trade currently passes through overburdened Northern European ports. The quality of rail and road connections between the Northern Adriatic and the Czech Republic are indeed an advantage in fostering the growth in Koper’s trade relations with the country. Based on Luka Koper‘s ambitious investment plans for port infrastructure – 500 million euros over the next five years – the Czech Prime Minister was also interested in the possibility of Czech investment in the Port of Koper. Management Board President Časar agreed that strategic investments – particularly from hinterland markets – were always interesting and most welcome, especially those which could facilitate throughput growth.
View all posts
Luka Koper d.d.