Down to -15 metres by the end of summer

Last year, with the completion of seabed dredging in Basin I of the Port of Koper to -14 metres, Luka Koper anticipated further deepening for an additional metre this year. 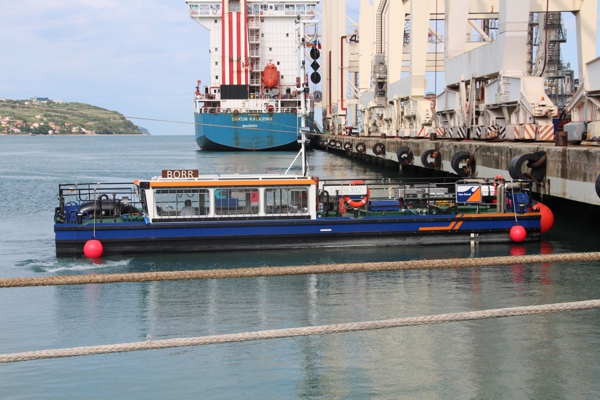 The works executed by Borr dredger which commenced with technically challenging operation under the supporting structure of the quayside, i.e. among the piles, will be completed in a month.

In August, dredging will be taken over by Borr’s ‘big brother’ that we’ve known from last year – the hopper dredger Dravo Costa Dorada by the Netherlands-based contractor Van Oord which applied for public call. About 66,000 m3 of sea sediments will be removed and pumped to a dedicated disposal site in the port’s hinterland. The investment in the value of 1.7 million euros is co-financed within the NAPADRAG project by the EU’s TEN-T programme.

Container handling has absolute priority thus the actual course of works fully depends on the traffic in Basin I and the occupation of berths. Dredging works will also be executed in the access channel to Basin I. In charge of this project, the Slovenian Maritime Administration already signed a contract with Luka Koper INPO which deepened the channel to 14.7 metres last year but was forced to stop the works because of the lack of space at the disposal site. The remaining 30 cm of silt deposited along the channel will not be removed by the good old Martin Krpan which retired this year after 45 years of service.

“Seabed dredging in southern section of Basin I is part of a larger project aimed to increase the capacity at the Container Terminal. Cargo freight has recorded the largest growth among cargo types over the recent years. Last year, Luka Koper handled over 674,000 TEUs whilst in the first quarter of 2015 the container throughput increased by 19 percent,” commented the investments in the Container Terminal facilities Luka Koper’s Manager Board President Dragomir Matić. In addition, by enhancing the bearing capacity of soil in the Terminal’s hinterland we will able to stack up to seven containers and thus acquire additional areas for empty containers storage. The documentation for the completion of the abovementioned project – which in addition to new storage areas also anticipates the construction of facility for the provision of container cleaning and repair services, a new rail track and a facility for the inspection of reefer containers – is currently being prepared.