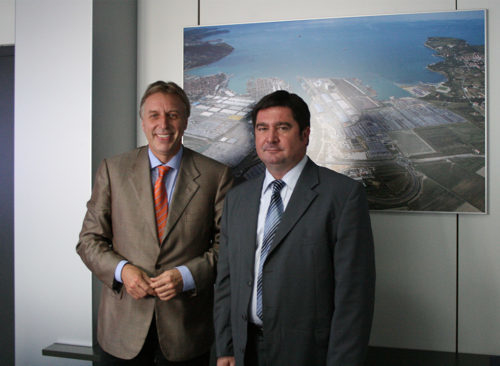 On Monday 3rd November Luka Koper hosted Mr Erich Staake, CEO of Duisburger Hafen AG, the inland port of Duisburg, Germany. This was the first such meeting of the management of these ports which, in the context of the current economic situation, are searching for new business opportunities and options for co-operation. These are rendered possible due to the similar organisation and operation of Luka Koper and Duisburger Hafen; indeed, both are public enterprises managing port terminals.

Located on Germany’s longest river, Duisburg is Europe’s largest inland port and handled 110 million tonnes of cargo last year. Its extensive hinterland in the context of the Rhine watershed, in combination with excellent road and rail connections, facilitates the transport of all types of goods in every direction. Among other facilities Duisport has at its disposal 5 container terminals, 5 coal terminals, 9 covered areas for cargo handling and 1.5 million square meters of warehouse storage.

Due to its strategic location at the junction of the fifth and tenth European transport corridors, Duisport is very much interested in the Port of Koper. CEO Erich Staake paid particular attention to Luka Koper‘s investments in inland terminals, as well as the issue of empty containers, which occupy precious storage facilities and represent a burden to any port.

German markets account for some 3 percent of all transit cargo passing through Koper, and strengthening all forms of co-operation with such an important logistics centre as Duisburg presents yet more opportunities in the redirection of cargo away from Northern European ports to those of the Adriatic.