Extension work on the container quayside has started

With the installation of the test-drilling pilots, the Port of Koper’s most important infrastructure project started today, namely the extension of Pier I, which will ensure the further development of the port and boost its international competitiveness. 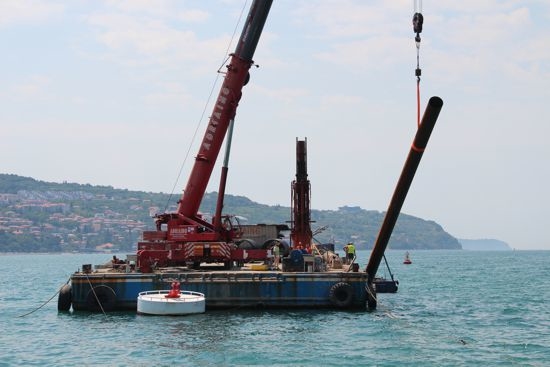 The Pier I extension project anticipates the construction of a quayside 98.5 metres long and 34.4 meters wide, as well as the construction of a hinterland area on the pier’s southern side with a total size of 24,830 m2. The length of Pier I on the southern side, designated for container handling, will be 695 metres. The whole investment which is expected to be completed in 2021 will result in a container terminal able to handle at least 1.5 million TEUs annually.

The Pier I extension is a strategic project for Luka Koper, which, in addition to infrastructure investments, also anticipates the acquisition of new cranes, machinery and other equipment. The total value of the investment made by the Port of Koper in the modernisation and quayside extension is approximately 235 million euros (part of this amount has already been spent on past projects, such as new cranes, dredging and railway construction).

For the project, the company has also been awarded 6 million euros of EU funds as part of the NAPA4CORE project (Connecting Europe Facility funding instrument).