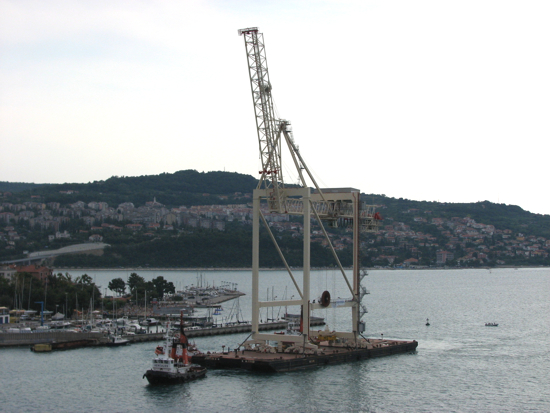 On Friday 31st July a large barge transporting a new crane for Luka Koper’s Container Terminal, was moored alongside Pier I. Manufactured by Liebherr in Killraney, Ireland, it was assembled at the Trieste shipyard, before being transported to Koper, by barge, for installation.
The post-panamax crane has a maximum lifting capacity of 75 tonnes, but more important than this is its reach. The boom of the crane can reach up to 51 metres, thus allowing the smooth unloading and loading of very nearly all of the world’s largest container vessels.
This is a significant and essential acquisition by Luka Koper, and the finishing touch to the Pier I extension project. The fact that it will now be able to receive ships with capacities of 9,000 TEUs will make the Port of Koper an even more attractive destination for container freight lines.
Weighing in at 920 tonnes, the new crane is a true giant. The distance between its four legs is 30 and 32 metres respectively, and it can lift cargo 36 m above ground level. Its hoisting speed with a load amounts to 65 m/min (and 140 m/min without a load), whilst the trolley travels at 180 m/min. These speeds are significant because they allow the swift execution of handling operations, an essential requirement of the ship-owners who demand rapid turnaround times.
Because this operation required complex safety preparations as well as a suitable sea level, the crane was transferred to the rails at the port quayside the following day. Very soon the entire procedure will be repeated again upon the arrival of the second crane of same type at Koper. Last year, Luka Koper placed an order for four such cranes from Liebherr, of which the remaining two will be completed this autumn, most likely in October.
View all posts
Luka Koper d.d.