First Vessel Berths At The New Extension Of Pier I 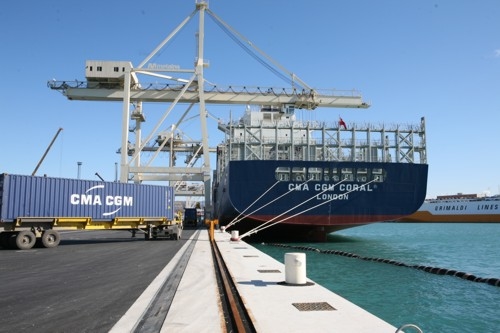 On Friday 13th of February a container vessel of the French CMA-CGM line, which provides a regular service between the Adriatic and the Far East, arrived alongside berth 7c on the extension of Pier I, and unloaded and loaded a total of 2,252 TEUs. This is an important event for Luka Koper d.d due to the fact that it is the first vessel to use the recently completed final 96 metres of new quayside. Slovenia’s Ministry of Environment and Spatial Planning decided to allow the test operation of this facility earlier this month, thus denoting the formal completion of the final phase of an investment project which has seen Pier I extended by 146 metres. The Ministry is expected to issue a permanent operating permit for the new facility following a six-month probationary period. The first 50-metre-long portion of new quayside was commissioned last December.

Although the new quayside area is already in use, Pier I is not – as yet – fully completed. Two new post-panamax cranes will be installed in early June, and two more will be arriving in October. Further to this, the reclamation of the hinterland areas – i.e. the in-filling of the adjacent lagoons – is now underway, and will provide nearly 16,000 m2 of additional storage area for containers.

The extension of Pier I is of strategic importance for Luka Koper, and provides the port with an additional competitive advantage. The new post-panamax cranes will be able to service vessels with 8,000-container capacities. The containerisation of maritime cargo has increased dramatically over recent years, a fact which is also corroborated by January’s throughput performance. Despite the economic crisis, the company handled 27,651 TEUs, a volume comparable to January 2008. Overall, 1,500,484 tonnes of cargo passed through the Port of Koper in January, which is 10% ahead of the same period last year, and further proof – if such were necessary – that it is very difficult to accurately anticipate future levels of maritime trade.

This said, however, the economic crisis has impacted the operations of both shipping companies and port operators, Luka Koper included. There has been a considerable – and according to current market conditions inevitable – downturn in the number of new vehicles being shipped through the port, 63% less than in January 2008. A decrease was also recorded in dry bulk cargos. On the other hand, there was a substantial increase in fuels throughput, in particular bulk and liquid cargos. Further to which silo bulks and perishable goods at the Fruit Terminal were also up, which is of considerable significance and importance to Luka Koper’s business operations.