Golden Anniversary of the Arrival of the Gorica 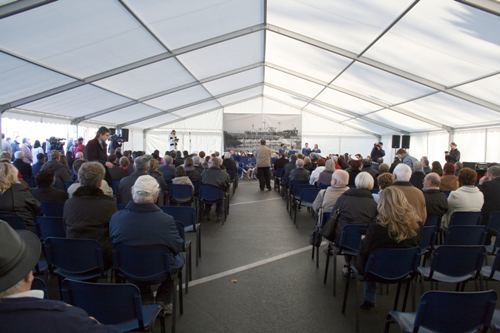 On Sunday 7th December Luka Koper organised a ceremony to commemorate the fiftieth anniversary of the arrival of the Gorica, the first ocean-going vessel to use the Port of Koper, and a huge number of people celebrated the symbolic moment when Primorska and Slovenia was opened to the world.
Following a blast on the horn of a tugboat, which announced the beginning of the ceremony, the old quayside, which will soon become the site of a new passenger terminal, was brought to life in a recording of the original Radio Koper broadcast in which Jože Lavrenčič reported on the arrival of the first cargo steamer to tie up alongside the newly inaugurated Port of Koper. In an interview with Radio Koper’s Nataša Benčič, Ivan Brezec, one of those who had eagerly awaited the vessel half a century ago, recounted his experiences and perceptions of that historic day.
Following an address by Mr Robert Časar, President of Luka Koper’s Management Board, the microphone was handed to Dr Patrick Vlačič, Slovenia’s new Minister of Transport. In the introduction, the Minister acknowledged all those who had participated in the planning, development and growth of the Port of Koper. It is thanks to their audacity and effort that Koper’s favourable geo-strategic location was utilised for the development of a technologically advanced, modern and dynamic port. Further to this Dr Vlačič pointed out that in his new role as Minister of Transport he will – in consideration of the local milieu, environment-protection standards and expert counsel – strive to ensure the realisation of the Third Pier as a strategic infrastructural project. He also referred to the significance of first class rail links; current capacities are nearly full, and, according to the Minister, the renovation and modernisation of railway infrastructure represents not only a development challenge to Primorska but also to Slovenia as a whole.

The wide-ranging programme of entertainment which followed was enriched by a performance by the Koper Brass Orchestra and singer Alenka Godec. The ceremony also encompassed the presentation of a special postage stamp commemorating the arrival of the Gorica, the first issue of which was officially stamped with a special seal by the President of Luka Koper Management Board and the Minister of Transport to mark the conclusion of the day’s celebrations.