Luka Koper Gets The Concession 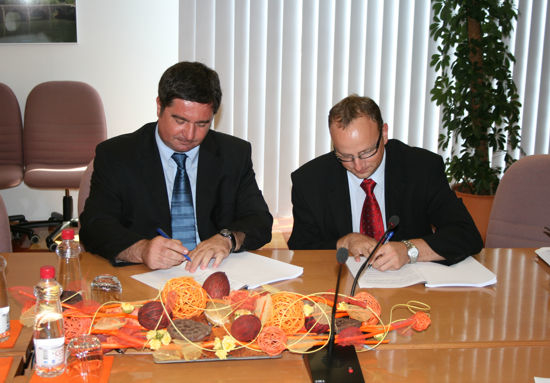 Slovenia’s Minister of Transport Mr Radovan Žerjav, and Mr Robert Časar, President of the Luka Koper d.d. Management Board, yesterday (8th September) signed the concession agreement for the provision of port services, as well as the management, development and maintenance of infrastructure at the Port of Koper.

Eagerly expected for several years, the concession agreement between the Republic of Slovenia and Luka Koper d.d. determines the mode of calculation of the concession fee, the rules of governance, the management and operation in the Port, as well as the rights and obligations of contracting parties upon the suspension or termination of the concession relationship. In addition, it encompasses the agreement of the contracting parties on the mode and dynamics of investment into infrastructure together with provisions as to the assurance of openness regarding port operation.

In compliance with the provisions of the Maritime Code, the concession agreement is concluded for a period of 35 years, which is long enough for the concessionaire to accomplish its infrastructure development plans on the basis of which Luka Koper shareholders will be guaranteed a safe and reliable long-term return on their investment.

The agreed concession fee amounts to 3.5% of the company’s operating revenues, reduced by the amount of collected fees. The fee also encompasses water rights, water taxes as well as other duties related to the use of territorial waters pertaining to the Republic of Slovenia. The concessionaire shall pay the balance of the concession fee in equal proportion – 50:50 – to the state and to the municipality of Koper.

The concession agreement signed today is the result of several years of harmonisation between the government and Luka Koper, and marks the culmination of negotiations which began following the company’s denationalisation in 1996. The lease agreement for port infrastructure, concluded in 2000, provided a stop-gap agreement, and the adoption of the Maritime Code RS in 2002, together with its implementing regulations, provided a legal basis for the conclusion of a full concession agreement.

During the process of negotiation and reconciliation of the agreement text, the contracting parties managed to harmonise various interests, as well as provide framework conditions which guarantee the interests and influence of the state as regards the only commercial port in the country. At the same time the agreement simultaneously provides Luka Koper, as a public limited company, the grounds and conditions for its continued successful operation. The common goal of both parties was to guarantee the future and further development of the Port and its infrastructure, as well as operations of the country’s sole maritime gateway.