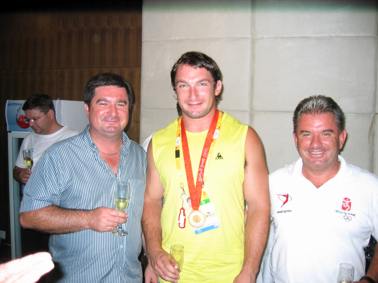 Mr Rober Časar, the President of Luka Koper d.d. Management Board, yesterday visited the Port ofTianjin , the largest port in Northern China and the fourth largest in the country. He met with Mr Zhao Yanhu, Vice-President of the Tianjin Port Group, which operates the facility, and agreed upon the joint signing of a letter of intent which would strengthen co-operation between Koper and Tianjin .

Tianjin‘s size and cargo throughput are 20-times larger than those of the Port of Koper , which makes it the sixth largest in the world. Located some 200 km east of Beijing and covering a 60 km2 site, the port has 35 km of quayside, 140 berths for container vessels with capacities of up to 8,000 TEUs and draughts of a little over 19 metres. The Tianjin Port Group employs 20,000 people and handles 300 million tonnes of cargo per year, including seven million TEU containers. Tianjin ’s plans are certainly ambitious: they are currently completing the construction of their new Eastern Pier, which shall increase cargo throughput by one-third, and container freight by 50%.

Luka Koper is already connected with Tianjin via a regular weekly container vessel service (and there is a second such service to via Shanghai ), while trade between the two ports is currently growing at phenomenal 60% per annum. Further to this, the Port of Koper is the shortest route for Chinese exports destined for the markets of Central and Eastern Europe . All of the aforementioned has prompted the two enterprises to intensify their co-operation ever further, an ambition which shall be additionally fostered by the letter of intent. Indeed, Mr Časar and Mr Zhao today finalised the content of the letter, which – among other things – foresees the mutual promotion of the Tianjin-Koper route, as well as the exchange of information and technical support; it has also been agreed that the letter will be signed upon the visit of Tianjin delegation to Koper, which is anticipated in October.

Luka Koper’ s delegation, headed by the President of the Management Board, is visiting China in its role as sponsor of the Olympic Committee of Slovenia, an undertaking which it has proudly assumed for over a decade. Within the Slovene House in Beijing, where receptions in honour of Slovene medal-winners are being held, the delegation will tomorrow attend a meeting with representatives of Chinese trade and commerce, which is being organised by ’s Ministry of Economy and JAPTI (Agency of theRepublic of Slovenia for Entrepreneurship and Foreign Investment).