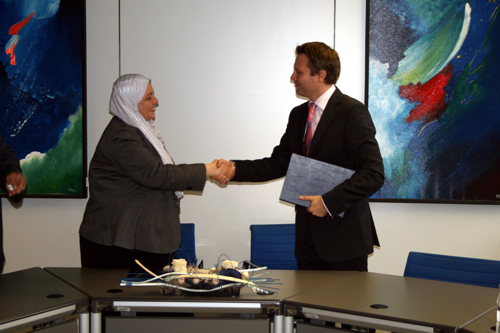 Over recent days, within the context of the Meda-MoS (Mediterranean Motorways of the Sea) project, Luka Koper has hosted a mission from Egypt’s Ministry of Transport, encompassing a delegation of Egyptian agricultural associations, ship owners and representatives of the Port of Alexandria. The objective of the Meda-MoS project, which is supported by the European Commission, is to promote short sea maritime connections between the countries of North Africa and Southern Europe, thereby facilitating and simplifying intercontinental trade.
Important links between Europe and Egypt have already been established via the Port of Koper; imports include – in particular – fruit and vegetables, whilst exports to Egypt consist of paper, metal manufactures as well as a variety of container freight. The potential for trade in perishable goods remains huge, for which reason our guests were for the most part interested in the potentials of the Fruit Terminal. They were pleased to realize that the Port of Koper has modern temperature-controlled warehouses, and that excellent co-ordination exists between the port operator, forwarding agencies, customs and the phyto-sanitary inspectorate; this allows perishable goods to be on European supermarket shelves just 24 hours after being unloaded at the port.
Luka Koper also signed an agreement with the Port of Alexandria Authority in order to further enhance co-operation. Henceforth both ports will engage in co-ordinated promotional activities with shippers, forwarding agencies and exporters, further to which information will be exchanged between them. The ultimate objective of both ports is to establish a regular direct container freight service between Alexandria and Koper.
View all posts
Luka Koper d.d.