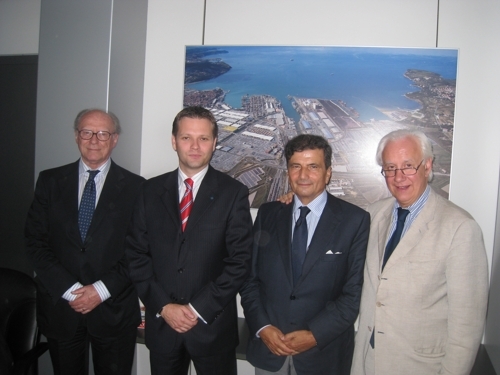 The directors of NAPA – North Adriatic Ports Association – ports met in Koper on 5th July 2010 to consider the Association’s activities in the first six months of its operation and, in compliance with its statute, appoint Mr Giuseppe Parrello, President of the Port Authority of Ravenna, as its new President for the next six months.
Concluding his presidency of the Association, Gregor Veselko, President of the Luka Koper Management Board, stated “In a mere six months of operation, the Association has acquired visibility beyond expectations. The successful presentation at this year’s Shanghai logistics fair literally placed us on a map of the world. As to Europe, the importance of the North Adriatic alternative is increasingly integrated in the formation of future European transport policy”.

Following the exchange of information on the spatial development of individual NAPA ports, the senior representatives signed a letter of mutual support for the adoption and implementation of their expansion plans. It is common knowledge that all four ports are undergoing the final adoption of spatial plans which provide a basis for the accomplishment of extensive infrastructure investments. Indeed, it was agreed that the augmented handling capacities of the ports will have a positive impact on the competitive edge of the Northern Adriatic region. This strategic document will be presented at the meeting of ports and hinterland transport network operators within the context TEN-T project that is to take place on 7th July 2010 in Brussels. The meeting, convened by the General Mobility and Transport Directorate of the European Commission, will provide NAPA an opportunity to present the advantages of the North-Adriatic route as well as the role of the Association in the formulation of the European port policy.