NAPA presents itself at the Transport Logistic China 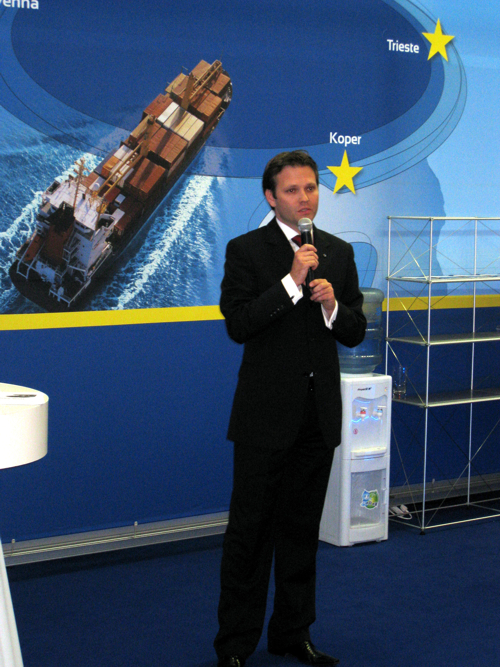 On 8th June 2010 the North Adriatic Ports Association held a presentation of its activities at its exhibition booth at TLC fair in Shanghai. Mr. Gregor Veselko, president of the association and president of the Management Board of Luka Koper introduced to the public the motivations and objectives of NAPA.
President Veselko stressed the importance of the North Adriatic area as a gateway for increasing cargo flows from the Far East and that shippers slowly get aware of the advantages of the Adriatic transport route. As a positive result he mentioned the launch of the joined Maersk and CMA-CGM direct container service connecting Asia to Adriatic in 2009. Ms. Maggie Hai Lei Wang, General Manager of Commercial Planning at Maersk China Shipping Company Limited, agreed that the choice to establish a direct service with Adriatic was a good answer to the difficult global circumstances in 2009 and growing volumes of cargo just prove the right orientation. Another proof of the of the growing importance of the Adriatic route is the establishment of the new container service launched by four carriers (Hanjin Shipping, Hyundai Merchant Marine, Yang Ming Line and United Arab Shipping Company) in May 2010. The first vessel of this new service departed from Pusan (South Korea) the last day of May and is expected in Koper on 27th June. The rotation in the Adriatic includes the ports of Trieste, Rijeka and Venice.
View all posts
Luka Koper d.d.