One Third Of New Container Quay Already In Operation 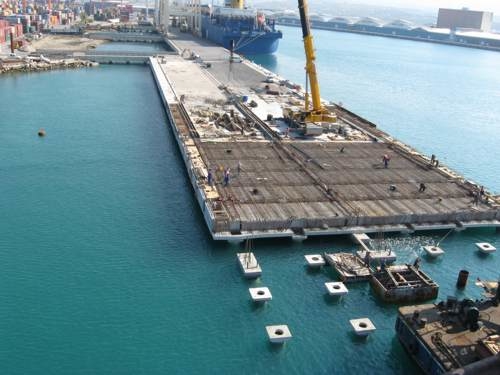 On Friday 24th October 2008, following a successful technical inspection, Luka Koper received permission from Slovenia’s Ministry of Environment and Spatial Planning to embark on the trial operation of berth7C, adjacent a new 50-metre extension of the existing container quay. The remaining 96 metres of this pier development project will be completed by year’s end, with anticipation of full operation early in the new year.

Further to the construction of the container quay – together with the in-filling of the hinterland areas of the pier extension, which will provide the terminal with new and valuable container handling and storage areas – four large new generation post-panamax cranes are also on order. The increased capacity of the terminal will allow Luka Koperto double container throughput.

Total investment in the extension and arrangement of Pier I, together with the purchase of requisite plant, machinery and equipment, will amount to some € 120 million. Financial analyses and calculated indicators of economic viability confirm the legitimacy of decision to increase container terminal capacity at Luka Koper. Calculated on the basis of yield rate of a little under ten percent, this infrastructure investment is anticipated to pay for itself in 19 years.

Luka Koper’s container terminal handled 261,086 TEUs during the first ten months of this year which is 16 percent ahead of the same period last year.