Presentation of Slovenian Logistics Potentials in Malaysia and Singapore 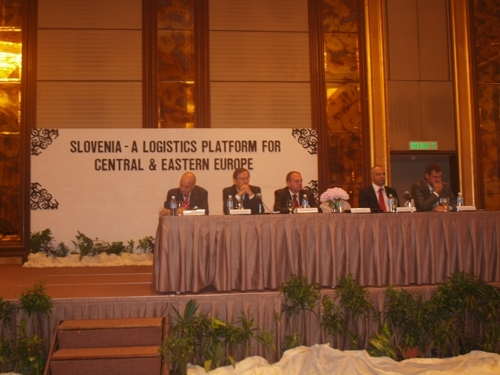 Between 20th and 22nd October, a government and commercial delegation to Kuala Lumpur (Malaysia) and Singapore presented Slovenia’s capacities and potentials as a logistics platform for trade flows destined for Central and Southeast Europe. The delegation was headed by Igor Jakomin, state secretary at the Ministry of Transport, and was – further to Gregor Veselko, President of the Luka Koper Management Board, and his deputy Tomaž Martin Jamnik – also composed of representatives of JAPTI (Slovenia’s Public Agency for Entrepreneurship and Foreign Investments, which also covered the cost of this promotion), the Transport and Communications Association, Ljubljana Airport, the state railways as well as Slovene transport and logistics providers. In its organisation of presentations, Slovenia’s Chamber of Commerce and Industry was assisted by Luka Koper and Infinity Logistics and Transport, our representative in the Far East.
Despite the recession, trade flows with the Far East continue to grow. Such particularly holds true for Southeast Asia, where Singapore and Malaysia’s Port Klang are important regional hubs for European shipping. The presentation aimed to stimulate logistics providers in Southeast Asia – namely ASEAN countries – to use Slovenia as an entrepôt and distribution hub for the countries of Central and Southeast Europe. In addition, members of the delegation also introduced various possibilities for foreign investment in the field of logistics.
The Slovenian delegation visited, among other places, the Port Klang Authority as well as the Northport and Westport Terminals; it also met with representatives of Malaysian and Singaporean forwarding associations.
View all posts
Luka Koper d.d.