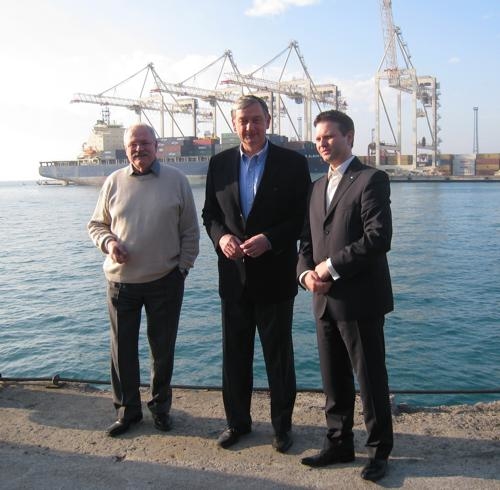 On 16th March, during a two-day state visit to Slovenia, a delegation headed by Slovak President Dr. Ivan Gašparovič, visited Luka Koper in the company of the President of the Republic of Slovenia, Dr. Danilo Türk. The commercial section of the delegation was comprised of representatives of a number of Slovak enterprises and interest associations. This visit is by no means incidental due to the fact that landlocked Slovakia is a very important market for Luka Koper, in addition to which, the countries have also adopted a maritime transport agreement on the use of the Port of Koper.
The guests were received by Luka Koper‘s Management Board, and following a brief presentation of the Port’s development plans, discussions focused on the possibilities of further expanding co-operation. Indeed, the Slovakian market remains of great interest to Luka Koper, further to which the company has opened an office in Bratislava and is willing to offer its Slovak partners suitable tailor-made transport and logistics solutions. The visit was concluded with a tour of the port.
Luka Koper handled a total of 587,476 tonnes of Slovak cargo in 2009, the major portion of which was attributed to alumina, steel, container freight and vehicles.
View all posts
Luka Koper d.d.