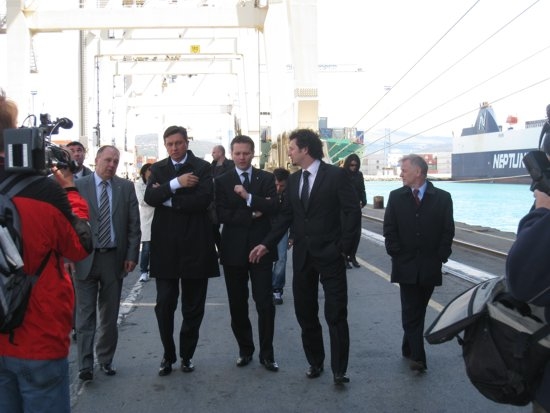 On 12th April, ’s Prime Minister, Borut Pahor, together with Minister of Transport Patrick Vlačič, and Zoran Kus, Secretary of State at the Ministry of Environment and Spatial Planning, visited Luka Koper.

The main subject of discussions was the course of the preparation of the National Spatial Plan for the Port of Koper , the company’s status in relation to access to European development funds, as well as Koper’s rail connection with its hinterland, namely, the construction of a second railway track between Koper and the mainline junction at Divača. In addition, they also addressed the issue of navigation channel dredging and insufficient disposal areas for the dredged material. The President of the Luka Koper Management Board informed guests as to the foundation and activities of the Northern-Adriatic Ports Associations (NAPA), an organisation over which he currently presides.

After the talks, Prime Minister Pahor and his colleagues took a tour of the Port of Koper, and guests were surprised by the size, and, in particular, the cleanliness and regulation of the port complex.

Following his tour, the Prime Minister talked to journalists and stated that he would do everything in his power to ensure that the National Spatial Plan will be adopted as soon as possible; indeed, the government is expected to make a decision on it on 13th May. Prime Minister Pahor also voiced his support for the idea that the Ministry of Finance should relieve Luka Koper d.d. from its current obligation to report and disclose in accordance with the Public Finance Act RS, because such hinders the day-to-day business of the company. Further to this, the Prime Minister announced the imminent interpretation of the Concession Agreement, which governs the relationship between the state and Luka Koper d.d., that will thence serve as a basis for the company to draw upon sources of EU funding.