Slovenia’s Largest Ever Investment In Romania 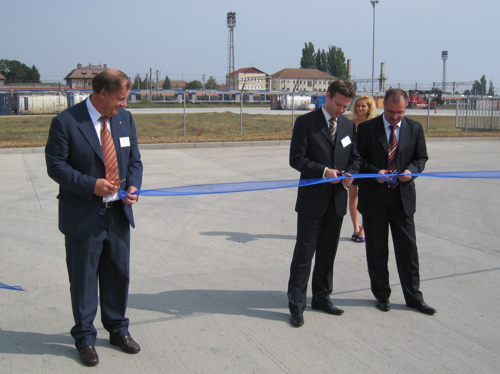 On 28th September 2009, the inland container terminal at Curtici near Arad, Romania, was officially inaugurated. This facility – RailPort Arad  – is a joint venture project involving Luka Koper, MAV Cargo (Hungarian Railways) and the Slovak logistics operator TTI,  each of which hold a one-third stake. Luka Koper’s participation in this new enterprise also marks the country’s largest investment in Romania.
Luka Koper decided to become involved in this project due to the terminal’s potential, which arises as a direct consequence of its location. On the main railway line, not far from the Hungarian frontier, Curtici is in the economically well-developed far west of Romania, a region in which a number of multinational companies have manufacturing operations in such sectors as steel, foodstuffs, vehicles, chemicals and consumer goods. The Port of Koper is likely to provide the western part of the country with a more rapid and cost-efficient alternative to Romania’s Black Sea ports; both the maritime route (as a consequence of the narrow Bosphorus) as well as inland connections (in terms of time) are significantly shorter. RailPort Arad will most definitely promote the development of multimodal connections and thereby the exports of a region which already generates 35% of Romania’s total GDP.
Covering more than ten hectares, RailPort Arad enjoys a mainline rail link to Hungary and the cities of Western Romania. It currently enjoys a direct weekly service to Koper, on the basis of which maximum annual throughput is estimated at 60,000 tonnes.
View all posts
Luka Koper d.d.