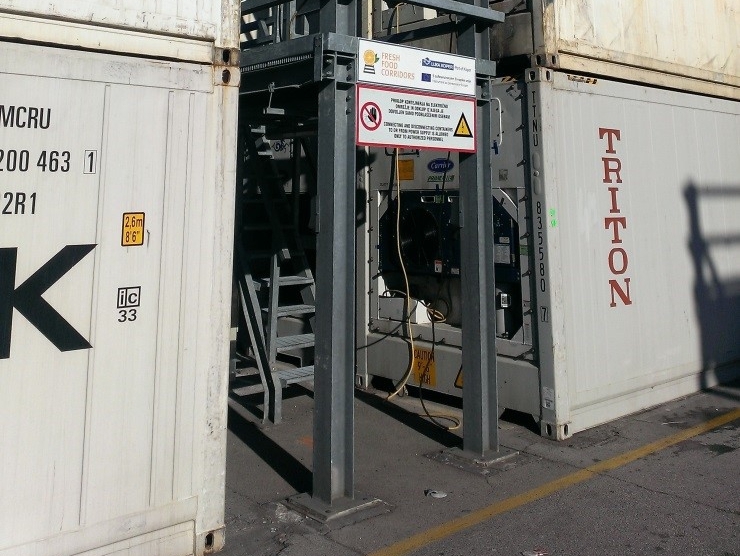 In these days at Luka Koper we host a larger delegation of partners with the representative of the European executive agency INEA within the consortium meeting of the project Fresh Food Corridors, which is cofinanced in 50% from EU, within the CEF program, on the Motorways of the Sea priority. There are 20 partners collaborating in the project from 5 countries (France, Cyprus, Italy, Israel and Slovenia). The aim of the project is to establish sustainable transport support for the delivery of perishable cargo from third countries in the Mediterranean area towards central and north European markets using innovative railway and ICT solutions via south European ports.

At Luka Koper in year 2016 we have successfully implemented some minor infrastructure upgrades at the container terminal for the needs of the project to support the loading of reefer containers on the train. On pier I racks were installed for temporary storing of reefer containers before they are loaded as well as an electricity power station to charge the plugged containers was realized. This year we have acquired also a new reach-stacker to load containers on the train. The value of this investments is about 1 million €, for which a 0,5 million € of European cofinancing is expected.

In year 2016 there were 2 test trains with reefer containers destined for Rotterdam. They demonstrated that such solution can achieve logistically competitive results in terms of transit times, quality and reliability of services as well as environmental sustainably. There are remaining challenges on the costs side which are related to back-load quantities which represent an essential factor. On Saturday 18th of March 2017 there will be another train departing from Koper and going to Rotterdam. We have big expectations on the 2nd part of the project, which will bring new innovative solution for supplying reefer containers on the transport route as well as improved ICT support.