The biggest in the Adriatic and beyond

The new super-post-panamax crane is an important achievement for the Port of Koper. 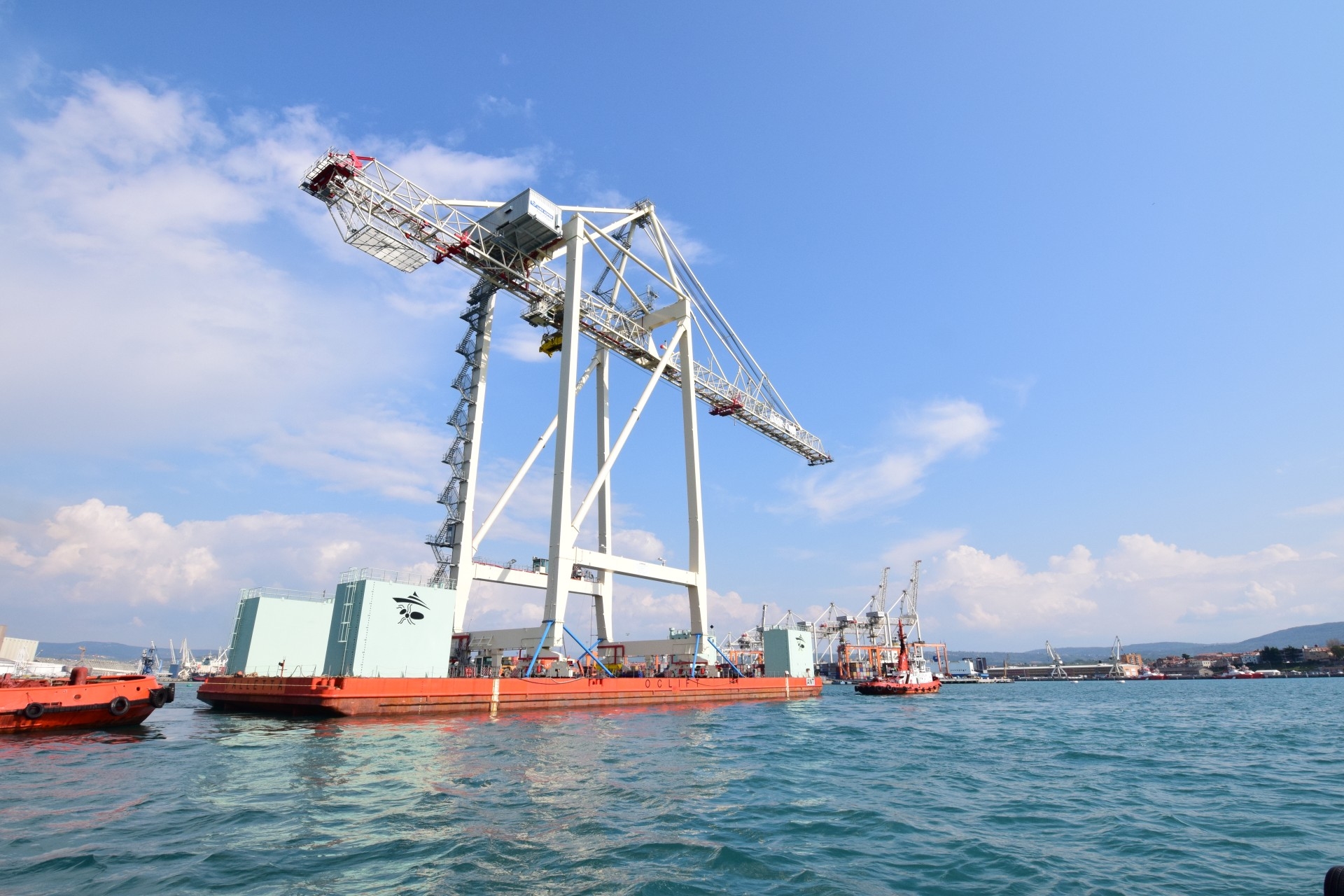 Today, the first of two quayside container cranes of super post-panamax (SPPX) dimensions was consigned to the Port of Koper. The new crane, which is among the largest container cranes available on the market, was assembled at the Viktor Lenac shipyard in Rijeka and reached Koper on board a special barge. The supplier of both cranes is the company Liebherr, which manufactured all the crane components at its factory in Killarney, Ireland. The second crane is expected to reach the Port of Koper next week.

The new, higher-capacity cranes are important mainly because of their ability to adapt to increasingly larger container ships, including those with a loading capacity of up to 20,000 TEUs (until now, only smaller ships with a loading capacity of up to 8,000 TEUs could be handled in the port). The four post-panamax cranes which have been in operation at the container terminal since 2009 are capable of lifting cargo up to 36 metres above the pier. Owing to their foldable, 51-meter-long boom, they can handle cargo on container ships up to 18 containers wide. The new cranes will allow the lifting of containers up to 48 metres above the pier (i.e. four containers higher than the existing cranes) and, owing to their outreach of 65 metres, will enable cargo handling on ships 24 containers wide.

An important advantage of the new cranes will be the increased propulsion speed during the moving of containers between the ship and the quayside, which will be 25 percent greater than the speed of the existing cranes. In addition, there are some other advantages that will contribute to better cargo manipulation. For instance, the cranes feature two separate systems (electronic and mechanical) for preventing the swinging of goods while they are hanging from the lifting cables. Owing to the installed laser system which exerts active control over the cargo being moved, both systems will contribute to higher crane productivity and will provide for the improved safety of everyone involved in the work process. To prevent the cranes’ arms from colliding with the highest parts of the vessels, a special laser system has been installed on the cranes which continuously monitors the crane’s surroundings.

The weight of the new crane is approx. 1,200 tonnes, whereas its load carrying capacity is 71 tonnes.

The advantages of the new cranes will become even more apparent as soon as the quayside of the first pier is extended by an additional 100 metres, as anticipated in the national spatial plan. The procedure aimed at obtaining environmental approval by the Slovenian Environment Agency, which is a prerequisite for obtaining the building permit, was started by the Port of Koper already last autumn, but no decision has been made yet. As a matter of fact, a mid-term objective of the Port of Koper by 2020 is to have two mother-ships (featuring a direct line with the Far East) moored along the container quayside simultaneously. For this purpose, the Port of Koper anticipates 235 million euros of investments in the container terminal by 2020, and the new quayside cranes are part of these investments.

At the Port of Koper, we plan to increase the capacity of the container terminal to 1.3 million TEUs/year by 2020. This will allow us to maintain our position as the largest container terminal in the Adriatic. We ended 2016 with a record throughput of 844,758 TEUs, which is 7 percent more than the level attained in the previous year. The growth trend is also continuing this year: between January and March, we handled 8.7 percent more container units (TEUs) than in the first quarter of 2016.