The Czech Republic – A Significant Prospective Market for Luka Koper 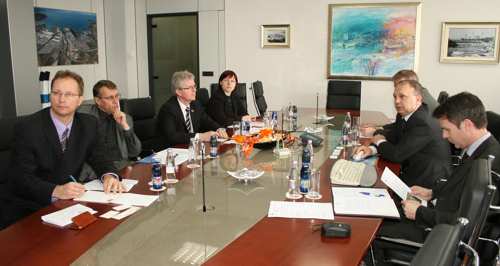 Yesterday, 9th March 2010, Luka Koper received a visit from Mr Martin Dvořák, head of the Department of Bilateral Economic Relations and Export Promotion at the Ministry of Foreign Affairs of the Czech Republic. He was accompanied by the new Czech Ambassador to Slovenia, Mr Petr Voznica, and the Embassy’s commercial attaché, Mr Michal Černik. The guests were received by Mr Tomaž Martin Jamnik, Deputy President of the Luka Koper Management Board.
The Czech Republic is significant market for Luka Koper, and last year cargo pertaining to it accounted for 1.9% of total annual cargo throughput at the Port of Koper, making it the fifth largest foreign customer. It is especially interesting to relate that despite last year’s recession Czech cargo shipped via Koper recorded a 41% increase on the previous year, whilst container freight was up by 117%. This can, in particular, be attributed to the inauguration of new automobile plants in the Czech Republic which are supplied materials and components from the Far East through the Port of Koper.
Czech overseas trade is still for the most part conducted via Northern European ports; however, it should be mentioned that although these ports are a similar distance from Prague as the Port of Koper,  the Adriatic route through the Eastern Mediterranean is 2,000 nautical miles nearer and some 6 days shorter sailing to all destinations East of Suez. Thus the Koper route is anticipated to grow further, particular as a consequence of the launch of new regular container lines to the Far East.
This January Luka Koper opened an office Bratislava, which also covers the Czech market.
View all posts
Luka Koper d.d.