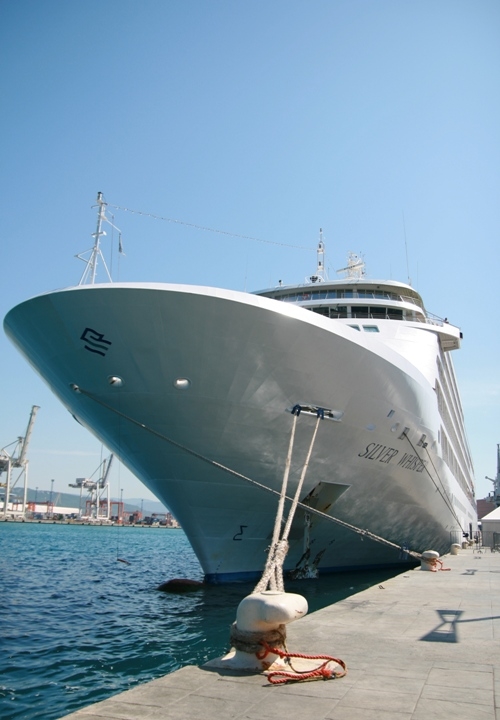 Koper, 30th July. This morning the Koper Passenger Terminal enjoyed its first visit by Silver Whisper, which is considered one of the most luxurious cruise ships in the world. Last Saturday 369 passengers, most of whom are either Americans or British, embarked at Piraeus (Athens) and cruised up the Adriatic, calling at Corfu, Dubrovnik and Trogir, before arriving at Koper. Tonight the vessel will depart for Venice on the final leg of its seven-day voyage.
Silver Whisper is the latest and largest addition to the fleet of the USA’s world-renown ultra-luxury line, Silversea Cruises. This 186-metre long vessel has a 25-metre beam and ten decks, the upper seven of which are for passengers. Displacing 28,258 tonnes, its six-metre draft allows the navigation of shallow channels and visits to smaller ports.
Propulsion is provided by two Wartsila 8R46 engines, generating 7,850 kW each. One of the most important characteristics of the Silver Whisper are her anti-noise and anti-vibration features, though the most distinguishing quality is, of course, luxury: superb décor, including cherry wood furniture, marble bathrooms and sterling silver tableware. Emblematic of this ultimate experience is the space afforded those on board; despite its size Silver Whisper carries just 388 passengers, and with a 295-member crew it provides an excellent service ratio – more than two crew for every three passengers.
This one-week cruise costs between 5,095 and 17,395 euros per person, with the price dependant on the choice of accommodation. Silver Whisper doesn’t have the usual passenger cabins, but suites; these are basically apartments classified in 9 categories and with areas of between 26 m2 to 133 m2. All 196 suites have – as one would expect – a seaview, and 159 also have a balcony. The vessel also features a swimming pool, various restaurants together with bars, shops and even a 356-seat theatre hall.
During their stop in Koper, the Silver Whisper passengers will be enjoying visits to the Lipizzaner stud farm, Postojna Cave, Ljubljana, Lake Bled, as well as Slovenia’s Adriatic Riviera and the Istrian hinterland. A reception is to be held on aboard in honour of Silver Whisper’s first visit to Koper, and shall be attended by representatives of Luka Koper, the municipalityand Slovenia’s Consortium for the development and promotion of cruise shipping, while the captain will be presented with a special commemoration plaque.
Also, in this its fifth year of operation, the performance of Koper’s Passenger Terminal remains good; thirty arrivals have been recorded thus far this year, and 17,290 passengers have disembarked for visits. It is anticipated that some sixty vessels and approximately 36,000 passengers will have called at Koper by year’s end. In spite of the recession, projections for 2010 forecast no downturn in the cruise business, with a similar number of vessels calling at Koper, and passenger numbers even surpassing the previous year’s record level due to the arrival of larger vessels.
Koper is undoubtedly becoming an ever more attractive port of call for ships cruising the Adriatic and Mediterranean. Those lines already using Koper are happy with the destination, and there are a number of others now giving it serious consideration, especially given the infrastructure upgrade and the imminent construction of the new Passenger Terminal complex.
View all posts
Luka Koper d.d.